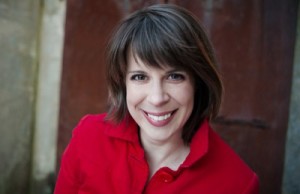 I had the pleasure of meeting Tavia Gilbert at a Darien Library audiobook event in late August. Struck by the beautiful tone of her voice, and her vivacious personality, I was eager to learn more from Tavia about possibly creating an audio version of The Vintner’s Daughter. Once she learned more about the novel, Tavia, in her generosity, introduced me to Blackstone Audio. After reading the galley, Blackstone made me an offer and naturally, I mentioned that I’d love for Tavia to narrate my novel. And that was before I knew she’d received six Audie nominations, four Earphones, a Publishers Weekly ListenUp Award, a long list of stand-out reviews, and consistent placement on Top Ten and Best Of lists! Thank you, Blackstone Audio, for providing a giveaway of the audiobook (enter below), and kudos to Tavia, for your dynamic read of The Vintner’s Daughter!

How did you become a voice actor/book narrator?
I specifically set out to become a narrator because I recognized the great opportunity in that career path. Working as a professional audiobook narrator would allow me to be a full-time actor, be engaged with story-telling and literature, connect to listeners and writers, have an independent business, and help me grow as an actor, writer, and artist. All those expectations have been more than fulfilled. I love my job, and feel incredibly fortunate to have made my living full-time as an audiobook narrator for the last seven years. It took a great deal of work — getting coaching specific to the craft of narration, setting up a home studio, cultivating relationships with publishers. I am still learning and growing as an actor, and hope and expect to do so for the rest of my life.
Why do you think audio books have become so popular?
Being told a story is a very intimate, tender experience, and no matter what age we are, we need that kind of deep, human connection. We’re wired for story. That’s how we make sense of the world around us, how we learn, how we develop culture and community. Shifts in technology — from analogue to digital — have made production much more efficient, affordable, and faster, so it’s easier than ever for an audiobook to be created and brought to market. I’ve been listening to audiobooks since the 1990’s, so I hardly remember a time when they weren’t part of my life. A wonderful audiobook is an absolute delight. The listener falls in love, in a way, with the story-teller and the story. Audiobooks comfort the lonely-hearted, the afflicted, the ill, the sightless. They keep busy lovers of language company when there’s little time available for the dedicated reading of a book in print. Human beings have been telling stories for thousands of years. It’s nothing new, just updated versions of technology.

Could you describe the process of creating an audio book, from the moment you receive the manuscript to the final production stages?
I’m sent a digital manuscript of the print book by an audiobook publisher, and I open the manuscript in iAnnotate on my iPad. I read the manuscript closely, marking the script carefully with various highlighters and underline tools; I mark every unfamiliar word or term I need to research in red. Every new character is highlighted in purple. Every bit of character description is marked in orange. Chapter headings are marked in yellow. In a scene with various characters in dialogue, especially those without attributions (“Jane said,” “Richard answered”), each character’s line of dialogue will be underlined in a different color, so I can visually track the flow of the back and forth of the conversation without missing a beat. Dialogue direction (“he growled,” “she hissed,” “she shouted”) is marked in green, so that I can deliver the dialogue with a touch of that suggestion. Character’s specific vocal qualities are marked in blue (“his textured baritone,” “her adenoidal squeak”), so that I know what the writer has offered for vocal characterizations. I research all the red terms, often in partnership with the writer. If the book has many characters, I’ll make a character chart where I break out different aspects of characterization, like attitude/emotion, tempo, pitch, placement (does the voice come from her chest? his throat? his stomach?), so that I can frequently refer to the chart throughout recording to ensure that the many characters are differentiated and consistent. The book I’m recording now — Sing in the Morning, Cry at Night — has taxed me more than any other project. I’ve recorded a series of lines in dialogue in Lithuanian dialect, researched the Welsh and Polish dialects, recorded native Welsh and Polish speakers voicing the foreign language phrases the writer included in the book, listened to several bird calls to include in the book (a young boy is an expert at bird calls, so I have to approximate a cardinal, a blue jay, and more), learned the Welsh national anthem — in Welsh, reacquainted myself with several old hymns…I’m recording very slowly and carefully, while preserving a fresh sense of discovery and using the technology to make my many, many stops and starts sound seamless. That’s more than most books require, but it does offer a glimpse into the challenges of an audiobook narration. I want my work to be excellent every time. Each project is different, but it’s great to really commit and make sure I’m doing everything I possibly can to make the most complete audio world I can. Once the recording of each chapter is complete, I upload it to my publisher. They edit and proof the recording, ensuring that my narration is word perfect to the script. They send a list of corrections, which I record and send, and then the book is ready to go out into the world!

How do you prepare yourself to successfully switch from one character to another while reading? What is the largest cast of characters you’ve brought to life in a single book narration?
I’d heard before of narrators underlining characters in dialogue, but until a recent project — The Memory Garden — in which three elderly women, two teen girls, and a young man were in conversation, I hadn’t ever used that technique. But it’s so helpful. When I see the blue underline, it’s a quick visual cue that character A is talking. Pink is character B, yellow character C, and so on. Even though it creates a good deal of work to prepare a script with that level of detail, it makes my job in the recording booth easier when I give myself a roadmap. Other than that, I just record the scene — acting and reacting character to character. The largest cast so far has been around 100 characters. One of my strengths is character differentiation, and I’m trying to get better and better at this all the time, because I love listening to virtuoso narrators play a huge cast of specific characters who sound, almost unbelievably, like 100 different people. I want to offer listeners the kind of performance I myself would want to spend 8 or 12 or 15 hours with.
Which accents have you used in your audio book narrations, and what do you do to perfect them?
I’ve done a lot — French, Russian, German, Hawaiian, Welsh, Australian, Cockney, upper crust Brit, Manchester, Chinese, Japanese, Mexican…and the truth is, they’re not perfect. Some are more fully realized than others. But the important thing — the imperative thing — is that the acting is good, meaning real, authentic, human in every bit of character dialogue. Not every native French speaker sounds the same. Not every native Spaniard sounds the same. But they all have to sound like real people, with needs, desires, motivations behind their speech. If I get that right first, the accent follows, but is always secondary. I use the International Dialects of English Archive daily, and Paul Meier’s dialect materials. I work with a great coach from time to time. I practice. I listen. But then I just act.
What steps do you take, i.e. sleep, diet, vocal exercises, etc. to get ready for a book narration?
I don’t do a lot of special stuff. This is what I do all day every day, so my voice is pretty ready to go and flexible. But I definitely take good care of my health — exercise 4-6 times a week, eat a healthy diet, get enough sleep, use a humidifier in my bedroom at night, stay hydrated, don’t strain my voice, don’t smoke, drink moderately. The healthier and stronger I am, the healthier and stronger my voice will be. I also sing, which I think is really important, not only for my emotional/spiritual health, but for my vocal flexibility and stamina.
What advice would you give to someone who’d like to break into voice acting?
I’d say that specific coaching is imperative. Seeking training specific to the genre in which you’re interested is a must. Find the right vocal coach for your desired goal — audiobooks, animation, corporate/medical/documentary narration, commercial work. Don’t believe that someone is the best coach in the world just because they say they are. Don’t spend thousands of dollars on coaching until you have affirmed that the coach is worth it. And then, if you’ve identified a great coach, be prepared to invest in their training. Don’t make a demo until you’re ready. Don’t think that things happen easily and quickly. Don’t ignore the business of your business. Being a voice actor is being an independent small business. Take yourself and your business seriously. Read everything you can about the business of voice acting. Get involved in voice acting communities. Ask a million questions. Get to know the culture you want to be a part of. And thank everyone, sincerely and meaningfully, for their help and support. Gratitude and humility go a long way.
What advice would you give to authors, like me, who read their books aloud at book signings?
What a great question! SLOW DOWN. Don’t be afraid to take time to breathe. You don’t have to read like a freight train hurtling down the tracks. You can pause for breath, to swallow, to allow a pregnant pause. SLOW DOWN. Imagine the thoughts as the character thinks them, in real time. See the scene playing out in your mind in real time. SLOW DOWN. Breathe. Pause. Enjoy the opportunity to tell your story!